We are hunters too, although with outfitting, we do not get much time to hunt deer.  But because of our hunting background, you can be assured that we know deer and we know this area very well. WE hunt on fewer than 600 acres and outfit for our hunters on almost 80,000 acres of northern Saskatchewan boreal forest and farmland fringe! As a family we are committed to ONLY hunt our own little piece of property - private land that previous outfitters never had access to. Our family does not hunt the larger hunting lease but we do spend a lot of time on it preparing and scouting for our hunters. Just imagine, what could be roaming the woods on 80,000 acres!

A Little more About Us (Written by Shane):

Mom (Tara) and Dad (Randy) have their teaching degrees and used to teach in the public system. But the dream of a simpler family life in the bush, back near where Dad grew up, was always there. That led to the purchase of a trapline and that's where it all started! Our family has owned and operated a northern Saskatchewan trapline, off grid since 2003. A couple years after our first winter living on that trapline, we decided, as a family, to move from our farm (complete with electricity and running water) near North Battleford to a wild piece of land snugged against, and actually including some of the Northern Forest that contained our trapline. The land we moved to was a simple piece of farming land (majority forested); no house, no yard, no power. Apart from some gentle farming activity, it was untouched by human hands. We had an old truck camper moved onto what was going to be our yard site and, as a family, began an incredible adventure.

We slowly started to develop our ‘yard’ by adding a tarp covered ‘cook shack’ for eating and shelter purposes. With much help from all members of the family, we worked at building our own cabin from log timber purchased from a neighbourhood sawmill, along with logs from our own land.  Wanting to build to the best of our abilities, progress was slower than many of our friends and family would have liked to see. Plus, building only included summers as we always moved north, back to the trapline, for the long winters.  We quickly decided that it would be a much more enjoyable ‘camping experience’ if we had a better shelter situation. The old truck camper had gotten a lot more crowded as us boys grew up. So, our big step up in comfort came in the form of….a granary ( a 12'x16' shed used to hold grain)!

We moved the old granary to our yard which was beginning to look like a real yard with several structures including a partially built house-cabin. The main cabin building project took a short break as the "men" of the family concentrated on making the new addition livable. This big push was, in part, for our own comfort, however a large part of it was to show our gratitude to our amazing mother, whom you would never hear complaining about the rather primitive living conditions she was enduring. And so we transformed the granary into a small, but livable "house". We installed an airtight wood stove, a cook stove, bathtub, and loft. While others laughed at our somewhat strange living quarters, we were thrilled! And so, the focus was back on the house cabin, the real one!

As the building project progressed, so did our excitement for the finished product. We (boys) were going to have our own rooms, which was going to be quite the difference for the two oldest ones who had shared a room at the previous farm and since had been living in very close quarters in the form of a truck camper and a granary. No sooner was the roof on the cabin than the family moved in. At church we announced the long awaited move-in to our friends and family who once again chuckled when they heard that there were not yet any windows, doors, plumbing, beds, heat (wood stove), etc. However, these were not of vital  importance to us yet, we were in our cabin. The cabin built by ourselves from the ground up. The home cabin that was years in the making, and we were finally in. The fore-mentioned conveniences would come as we could accomplish them, however the triumph was in moving in. The conveniences began small with a 15 watt solar panel and a couple batteries. We still live off grid, with gravity fed running water to the washroom, hot water on a heater stove and now a bigger battery pack and a few more solar panels, solar freezer, and a 105 yr old ice box. A true off grid experience.

Time passed on our ‘Promised Land’ and we (boys) grew up. We were blessed to be able to hunt, trap, fish, and explore God’s wonderful outdoor creation. We spend more than half of every year up on our trapline which was  many hours by quad or snowmobile from our farm. Through the winter we had the privilege of trapping and harvesting lynx, coyote, wolf, fox, beaver, otter, mink, squirrel, weasel, sable, fisher, and muskrat. Being homeschooled until grade ten we were able to spend the entire Canadian winter, amounting to six or seven months, enjoying our trapline. Our time there has provided us with countless memories, some funny, some serious, but all good.  When winter finally ended, it was a mad rush to get back to the farm before our trails became rivers and our snowmobiles became submarines. Until we got an argo! With an argo came the freedom to stay longer, until now when we spend more time in the bush than at the farm cabin! It truly is home.

Back at the farm, we formed many friendships with our neighbours and enjoyed numerous late evening visits over many cups of coffee. One fall a neighbour, who was a fellow trapper, approached us and informed us that he was selling one of his traplines and had heard we may be interested. After a couple meetings and God’s guidance the two older boys had purchased their own trapline that conveniently neighboured ‘Ma and Pa’s’ trapline. During this time, another friend and neighbour approached us and informed us that he was selling the bear portion of his hunt outfitting business and figured we might be interested as it was located on ‘Ma and Pa’s’ trapline. Once again, after several meetings, and by God’s blessing, we were able to make a deal on the bear outfitting business. NEW Update: and now the same outfitter approached us in 2016 to purchase the remaining whitetail deer outfitting business he owned...we never cease to be amazed at God's provision for our family. Now, we have a business that allows us to stay close to home in a land we love and know incredibly well. And all of this, from land purchase to outfitting, has shown us the value of hard work and a recognition of a God who provides the desires of our hearts.

We try to do everything in life to the best of our abilities. Likewise we will operate this bear (and now whitetail) outfitting in the same manner. We have been blessed with a lifestyle that has provided us with much hunting, trapping and outdoor experience. As a result, we realize that a hunt is much more than just a hunt. It is an adventure and that is what we aim to provide. We provide hunters with a rustic, down-home family atmosphere experience that we hope builds amazing memories.

Join us on an adventure of a lifetime. Experience the untouched forest of Northern Saskatchewan in pursuit of the perfect bear (or now, even whitetail), be it an especially big bruin or the elusive colour phase (or a beautiful whitetail buck). Bear Essential Wilderness Adventures is a family run business situated in the middle of our Northern Saskatchewan trapline. We have lived on this trapline nearly every winter for the last fifteen years and as a result, we know the area we outfit in very well. This area has been untouched by hunters for the last several years and virtually untouched for the years previous to that, resulting in a high population of monster bears as well as colour phase bears. This is why we are certain that we can offer top quality black bear hunts. Our entire family looks forward to helping other hunters achieve the hunt of a lifetime during their wilderness experience.
-Shane Barks

​Side Note and Update: Sons of Winter... Reality TV Show 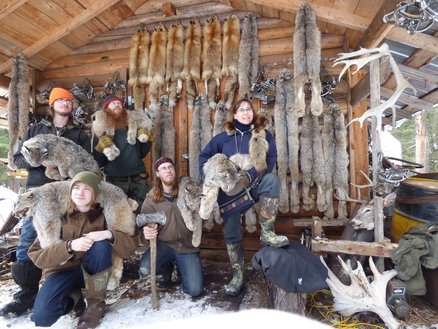 ​In 2014, word of our family's rather unusual, off grid, wilderness way of life reached Hollywood. Gurney Productions (producer of Duck Dynasty) and the Discovery Channel approached us with the request to film our way of life to share with the world.  It was not something we sought nor did we find it all that appealing. We love our quiet way of life as it is. However, we figured that if the good Lord put it together, maybe we should give it a shot...after all, we do believe that many folk out there could benefit from a glimpse into a different, more simple way of life. Thus began the filming of an eight 1 hour episode reality TV series, filmed in northern Saskatchewan in 2014-15.... We hope all that view it are challenged to dream big, live life as an adventure and consider carefully what matters most within each day granted to us. You can follow our family life updates on facebook here .  Episodes of Sons of Winter can be seen on youtube

So what are the "Sons" of Winter up to lately? They have busy lives,   but   still find time to bring exciting updates and special videos of   some of   the aspects of life as they live it in "real life". Check them   out on   youtube and be sure to subscribe there for more   updates: www.youtube.com/c/backwoodsboys

These same Backwoods Boys, can also help lead you on YOUR adventure of a lifetime with the family outfitting business,  Bear   Essential Wilderness Adventures. Trapline adventures, and Black Bear or Whitetail Deer hunts are sure to get the adrenaline   pumping and create memories that last a lifetime. So come to the "backwoods" and do life with us some time!